This time last week I was getting ready to head over to the Cropredy Festival. I'd never been to a folk festival before, so I wasn't really sure what to expect. In the event, however, what surprised me most was less how much I enjoyed it and more the eclectic mix of music I discovered there - it was only about half actual folk stuff, if that. I won't go over everything and everyone I saw, but here's a quick summary of the highlights.

Day One we missed most of the first act (Fairport Acoustic), but things really picked up as the afternoon wore on into evening with Bellowhead followed by Squeeze. Interestingly, Bellowhead were actually one of the few bands that played proper folk tunes, but their style of doing so was so exciting and innovative, that they were one of my favourite acts. Almost more an orchestra than a band, there are currently eleven members of the group, who play everything from fiddles to saxophones, bagpipes to mandolins, cellos to frying pans. The result is this fantastic, loud, feel-good sound.
Even hearing recordings, it's almost impossible not to want to sing and dance along. Seen on stage, the whole thing's even more exciting, with every performer absolutely bursting with energy and enthusiasm, and just generally seeming to enjoy themselves at least as much as the audience always do. Bellowhead have quite deservedly become five times winners of Best Live Act at the Radio 2 Folk Awards. For me, they were definitely the best discovery of the weekend.

Bellowhead were swiftly followed by the act I'd most been looking forward to, Squeeze, who didn't disappoint. Largely dispensing with the banter more typical of this kind of festival, Glenn Tilbrook, Chris Difford et al belted out one hit after another. I was a little disappointed that they didn't play what would probably have been the most appropriate song, given the gorgeous weather we had the whole time, but I'm going to put it here anyway for the hell of it.
That said, it was hard to be bothered about anything at all in the middle of such a fantastic set. Tilbrook's brilliant voice hasn't faltered a whit in 30 odd years. What's more, he did a great job up on stage in spite of some kind of foot injury - Chris Difford mentioned it on stage, but I also spotted him walking around on crutches at the festival the next day.
Also, I just had to post this because I loved his guitar so much - it's like Auntie Mabel's plane from Come Outside: 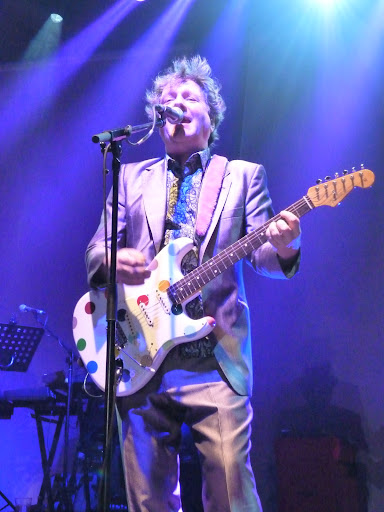 Oh, and I got myself one of these, too:

On the Friday, these guys were my favourite of the new bands:


Very, very pretty and melodic. I enjoyed Tarras so much that I went to see them do an extra couple of songs at a tent in the corner of the field to go out on BBC Radio Oxford. If you were listening to that, and you heard some jingly bells in amongst the clapping, that will have been my bracelet.

Naturally though, the best part of that day was watching Richard Thompson be amazing on his own. What that man can do with a guitar, and make it look so effortless.......I seriously think it might be magic. I'd never seen anything quite like it.

After he'd been on for a while, things changed a bit when he pulled out the electric guitar and was joined by some familiar Fairport faces.

And despite some obvious irony, Richard and his daughter Kami singing A Heart Needs a Home was lovely. I can't find a video of the performance, but here's the song (as performed by Kami's mother in 1975) anyway.


The evening ended with Joan Armatrading, a nice mellow way to finish off before heading home to bed.

I can't actually find footage or even a picture of it anywhere, but she did a really interesting thing sometimes with her guitar, where she had it sort of fixed to a stand so she could play it for a bit and then leave it and walk around and then go back to it again.

Another good part of Day Two was buffalo burgers from the Native American food stand. For some reason it wasn't one of the more popular ones. Shame for them, but fortunately for me it meant that we got delicious food without having to queue like everyone else.

Day Three I'm sorry to say I was probably paying slightly less attention to bands on earlier, particularly Brother and Bones, although what I did hear as I was nosing around the stalls and things sounded pretty good. I also remember thinking these guys sounded lovely...

I'm not really all about the Morris dancing, but I expect other people had fun with Morris On. Big Country apparently had some hits in the 80s, but none of our party had ever heard of them before, and I wasn't particularly impressed. The lead guy looked a bit like he'd really really like to be Paul Weller, but didn't really sound anything like him. Dennis Locorriere I thought talked a bit too much, and wasn't really as funny as he seemed to think he was. Again, I wasn't too bothered either way by any of his stuff. By far the best part of this day was Fairport Covention at the end. Being probably more of a granny than the many many people there who were old enough to be my grandparents, I got too tired to stay till the very end, which unfortunately meant that I missed this:

That said, I saw plenty of wonderful stuff before I went, so I can't complain at all. Most of the original line up of Fairport came out to join the current members, along with some of the younger musicians that played and sang earlier in the festival.