"Out of this wood do not desire to go": A Midsummer Night's Dream at the Shakespeare Institute 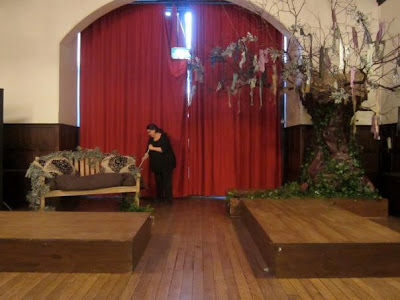 Prior to Friday night, my last visit to the Shakespeare Institute had been about a month ago, catching up with an Institute friend after an interview elsewhere in Stratford. At that point, the set for this week's performance of A Midsummer Night's Dream was just being put together. Consequently, I found myself sitting in on the construction of a huge and bizarre object out of odds and ends of wood. As interesting as things looked, however, I could never have anticipated how well the finished set would come together. 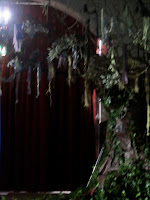 The Shakespeare Institute Players' production of A Midsummer Night's Dream, which finished yesterday evening, was a complete design triumph. Though the company's previous performance of Edward II in November featured some impressive acting, it was the additional attention to detail in this production – the time and care taken over the look and feel of the show - that lent it a more professional edge. Even before I'd seen the play, the very pretty poster design had already promised much, and the show itself did not disappoint. The wooden skeleton I had watched grow from the roots up had now been transformed into a beautiful tree, hung about with shimmery ribbons for an extra fairy-like, magical look. The woodland set indoors seemed almost to merge organically with the Institute's gardens - the back doors, through which players made many of their exits and their entrances, opening straight onto these. As the audience came into the room, frogs croaked and crickets chirped behind us, transforming the room into a forest alive with activity. And perhaps most impressive of all were the beautiful make-up and costumes designed, respectively, by Laura Nicklin and Red Smucker, the Fairy Queen.

A Midsummer Night's Dream is definitely one of Shakespeare's most straightforwardly entertaining plays, a comic fairy tale with an almost Disneyesque quality. This production got fully into that light-hearted spirit, excelling in the timing and execution of its comedy. The mechanicals were, quite rightly, laugh-out-loud funny, the actors' tireless energy betraying their genuine enjoyment of their roles. José A. Pérez Díez in particular was hilarious as the hapless, hopeless Bottom, and matching his enthusiasm was Laura Young as Snug the Joiner, who took to her lion's part with an almost child-like pleasure. Louis Osborne also made a very pretty Thisbe, hamming it up with lots of girly shrieking and swishing of his long, flowing locks. On the less flamboyant side of the party, I really enjoyed John Curtis' attempts to flatter and conciliate as Quince, the Prologue, and Thea Buckley's wonderfully dry “Wall”.

Almost as funny were the four lovers, especially Kat Twigg as the miserable, spurned Helena. Michael James' fight choreography was fantastic, playing up the slapstick as both he (as Demetrius) and Tudor Reece (as Lysander) ran around in and out of the room, crashing into doors and giggling gleefully at each others' mishaps, before dropping like flies as they were put to sleep by Puck.

Despite all the comedy elsewhere, a more unusual directorial decision had been made with regards to the fairies, and Puck in particular. Cecilia Kendall White presented us with a much darker and more sinister version of this character than we're perhaps accustomed to seeing – less happy-go-lucky trickster and more powerful, moody and malevolent force. I was reminded a little of the take on the character of Loki in the recent Thor and Avengers Assemble films, a similar kind of mischievous figure turned into something more serious and threatening. I'm told that one of the directors (the programme insists there were many), has a particular interest in mortality and magic, and it's from this that the production's darker interpretation of fairyland stems. It was an interesting take, though one I'm not sure entirely fitted in with the lighter tone of the rest of the production. Nevertheless, the fairies' performances were consistently strong. As Oberon, Peter M. Smith was the play's most commanding stage presence, really convincing us of his power to control and manipulate mortal lives.

Taken as a whole, the quality of this production exceeds anything I've yet seen at the Shakespeare Institute, seeming to fly by in a matter of minutes, the pace slowing only slightly right at the very end, as the monologues became longer. The show has really set a standard that won't be easy for future productions to follow, and both cast and crew should be very proud of themselves. I look forward to seeing what the SIP do next!

Special thanks to Louis Osborne for help with the photographs.
Posted by gorgeouslystupid at 18:18

Email ThisBlogThis!Share to TwitterShare to FacebookShare to Pinterest
Labels: A Midsummer Night's Dream, The Shakespeare Institute